Deaths from all causes in Wales during the Covid-19 epidemic 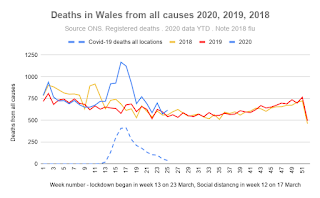 Deaths from all causes in Wales during the Covid-19 epidemic This is an update to the orginal post. For lack of other focussed sources, I am publishing the deaths from all causes in Wales during the #SARS-CoV-2 epidemic. The figures are taken from the Office of National Statistics. Similar analyses are now available elsewhere but when I started, inspired by the tweets of :@LloydCymru concerning related statistics, there were no such comparisons. Did Lockdown save anyone? The first chart plots All Causes deaths. The Finacial times has produced an excellent series of charts for UK cities, regions and nations. Also the series covers many countries as well. They have explored excess deaths compared to the previosu 5 years and, in England, found a third of excess deaths not to be attributed to #Covid-19. I have not taken an average of the last five years as it obscures the flu year of 2018 (a flu which almost killed me personally via three blood clots). I have plotted the flu ye
Post a comment
Read more

January 16, 2020
I may be biased but I think Putin's constitutional reforms are sincere. This is not, with an exception, an attempt to hold onto direct power. Insofar as President Putin lies, which isn't often, it is about security matters. Such lies are usually denials not misdirection. For example, the denial of what might seem to be plain truth such as the presence of serving Russian soldiers as Little Green Men in Crimea. After he was elected in 2018, he did say he probably wouldn't serve a full term. These reforms are him implementing that idea. The proposals for constitutional change mostly return the situation to what it was before Yeltsin pushed through additional powers for the president. The Russian constitution had been closer to the French model of a President rather than the US. Yeltsin did that under American pressure to protect Russia from the resurgence of communism. I guess the Americans did not anticipate Putin. That said, the proposal to limit the pres
Post a comment
Read more

March 13, 2019
An elected House of Lords is a challenge to the House of Commons. It would be a source of confusion. The democratic mandates would often conflict due to the electoral cycle. The decisive nature of First Past the Post politics would be lost. Better to increase the democratic mandate in sub national parliaments away from Westminster with a distinct set of powers. We need a House of Lords based on expertise, appointed ex Offico with heads of plcs, charities, professional associations, trade associations and trade unions. Also keep the LAw Lords and the Bishops but add other religions too. The Lors should have their existing power of amendment. Their specialist expertise will greatly improve the detail of legislation. Putting the movers and shakers in the Lords will also expose the oligarchs and their interests in a place that they can be seen by the public, as it used to be. They will be seen to lobby for their causes in broad daylight.
Post a comment
Read more

Revenge of the spies. How to become a target for the CIA, MI6, FSB and Mossad all at once.

March 18, 2018
2nd Edition My business involves assisting foreign companies with trade and investment in Russia . So I have a more than passing interest in Russia’s international relations. At times, because my office is in the provincial city of Saratov rather than in Moscow, I have perspectives on Russia that do not seem available to journalists and embassy staff based in the major cities. I’m writing about the attempted assassination of Sergei Skripal and his daughter Julia because the British media seems to have closed far too quickly on a single line of enquiry that is very convenient for the government. In particular, there has been no discussion of Brexit despite important initiatives from the European Union. I’m also surprised that two potential connections to Saratov that have arisen. Those who have not tracked the recent rise of anti-Putinism in the British media might want to read my Blog on this before reading about the Skripal case. The recent media storm against Putin seems to
Post a comment
Read more

March 18, 2018
Anti Putinism in the UK media Russia, and in particular its president does not enjoy good press in the UK. The price is almost universally Anti-Putin. Some of this is simply a hangover relating to the confrontation with the USSR. It should also be noted that London has been a refuge for a number of Russian oligarchs who have reasons to be negative about Putin. At least two of them, Berezovsky and Khordokovsky aspired to be president of Russia. In addition, there are Ukrainian oligarchs who suffered substantial losses because of Russian customs blockades against Ukraine who keep homes in London. This huge concentration of money has been used to pay for journalists , special editions of newspapers giving negative views about Putin, setting up think tanks to provide a steady stream of negative opinion about Putin, giving platforms to academics from the UK and abroad who are critical of Putin and perhaps more direct intrigue, certainly on the part of Berezovsky. Every year, a new h
Post a comment
Read more

The Gravity-Model-of-Trade for opportunities beyond the EU after #Brexit. The #Russian anomaly.

This analysis is aimed at businesses considering what opportunities are available beyond the EU following Brexit. It uses the gravity model of trade to show that the potential of Russia as a trade partner beyond the EU is second only to the US. It shows that the UK already tends to trade above potential with English speaking countries. It trades well below potential with Russia, Indonesia and Argentina. The shortfall with Russia is such that meeting average performance is worth more than any deal in Asia. The Gravity Model of Trade ( http://www.nber.org/papers/w19285 ) is one of the more robust models in economics. It is based on the observation that levels of trade between countries depend on the size of the economies and the inverse square of the distance between them. Double the distance between a pair of countries and the potential for trade falls to a quarter. The gravity model is persistent over time as it is includes geography which does not change. Growth rates in GDP and e
Post a comment
Read more

November 25, 2017
The EU is a huge success. It was founded generate peace and it has done so far beyond its original remit. It has also generated increased prosperity. The EU like Japan is a large net consumer of oil. China's growth sucked oil from the rest of the world. So, during the peak of the customary raw materials cycle from 2007 to 2014 the price more than tripled. Japan and the EU economies staggered to a halt. Advanced states with raw materials (UK, US, Canada, Australia) muddled through or prospered. Real costs rose across the world. Debt, sometimes euphemistically  called a liquidity problem, was exposed. It was mostly private debt in the US. In the EU, it was mostly government debt to private banks. Portugal, Ireland, Italy, Greece and Spain had the largest problems. In 2011, the Chinese workforce peaked. Most raw materials began to decline immediately. In the oil market, OPEC had some control of prices so it was not until 2014 that the price of oil plummeted. Unprepared prod
Post a comment
Read more
More posts

Philip Owen
I'm a Chartered Engineer with an MBA. I served an apprenticeship in the heavy electromechanical industry but finally ended up in new product management in the computer peripherals business before becoming a consultant in product innovation and later Trade and Investment with Russia. The innovation stage was very interesting. I worked with ESA, DERA, CERN, NESTA, Yet2.com, WDA, various universities and SME's. Russia's interesting and challenging too. My current business has a website http://www.volgatrader.com I want to write about Wales, Russia, technology development and the connections between them including Europe.